What is the difference between Radial and Cross-ply tyres?

Cross-ply tyres and Radial tyres are made using completely different methods, and their internal structure affects the performance of the tyre at every level. If you are looking for tractor tyres or similar then Crossply vs Radial might be a decision that you have to make.

Radial tyres were developed in 1946 by Michelin. At the time there was a need for more flexible tyres which were able to absorb shocks generated by road surfaces. The sidewall of radial tyres and the tyre tread work as two independent features. The flexibility of a Radial tyre, together with its strength, are two combined factors which mean a radial tractor tyre absorbs impact shock and bumps more effectively than a cross-ply tyre.

The flexibility of the sidewall enhances vehicle stability and provides maximum contact of the tyre with the road surface. This, in turn, leads to a more comfortable ride and allows the driver to work longer. These tyres are also stronger, which means machines that use tyres like truck tyres or tractor tyres can be operated at higher load capacities.

Advantages of radial tyres include:

Disadvantages of radial tyres include:

Crossply tyres have been used instead of full rubber tyres since 1898. They were a standard feature in the car tyre industry before radial tyres were introduced.

Crossply tyres consist of carcass layers made from nylon cord. They are placed diagonally across each other in the tread and the sidewalls, at an angle of 55 degrees. Multiple rubber plies overlap each other and they form a thick layer, resulting in less flexibility which can make it more sensitive to overheating. Therefore all high speed Tractor tyres are of Radial construction.

Crossply tyres provide a strong and rigid sidewall which tries to follow the natural lines of the road and this can cause a tyre to overheat when it is used on a hard road surface and this in turn, causes the tyre to wear out more quickly. However, the sidewall of a crossply tyre is more rigid than that of a radial tyre so is more resilient at preventing sidewall damage. Crossply tyres are therefore sometimes used if sidewall damage is a problem.

The crown of a crossply tyre and the sidewall of the tyres are dependent on each other. The tyre does not come into as much contact with the ground as a radial tyre and this may lead to less engine power transmission or more site damage. As it does not absorb as much impact shock, the driver can feel more vibration.

The initial cost of Crossply tractor tyres is cheaper than Radial tractor tyres so they are often an attractive choice to anyone on a budget. The rigid ride a crossply tyre provides can also be a benefit in applications where any tyre bounce would be a problem, such as on telehandlers or forklift machinery, so the rigid sidewall can be an advantage in certain working environments.

Advantages of crossply tyres include:

Disadvantages of crossply tyres include:

What is the difference between IF & VF tyres?

Understanding the IF/VF designations on farm tyres is pretty straight-forward.

IF stands for “Improved Flexion.”

IF farm tyres carry 20% more load, at the same inflation pressure, or could carry the same load with reduced pressure.

Structural & compound innovations allow IF farm tyre sidewalls to operate while flexing more dramatically. Utilising lower inflation pressures made possible by IF tyres, farmers can increase the tyre ground contact area, traction and fuel economy while reducing soil compaction by about the same amount as the reduction in inflation pressure.

IF and VF are categories of tyres that will help increase farming efficiency through reducing compaction and increasing fuel economy.

IF, which stands for ‘Increased Flexion’, is a new category of radial tyre introduced when Michelin launched the Michelin Axiobib tyres in 2006.

Tyres classified as IF have increased flexibility in the sidewall than standard radial tyres – this means that an IF will carry loads that are 20% heavier than identical sized standard radial tyres (when running at the same inflation pressure).  Alternatively, the IF tyres can carry the same load as standard tyres, but at 20% less pressure.

According to ATG, ‘a farmer can increase the tyres ground contact area, helping with traction and fuel economy, and reduce the harmful downward forces that cause soil compaction by roughly the same amount as the reduction in inflation pressure.’

VF, which stands for ‘Very Increased Flexion’ or ‘Very High Flexion’, was introduced by Michelin in 2003 with the launch of the Michelin Xeobib range.

VF is similar to the IF range except that it offers increased tyre performance of 40% over standard tyres rather than 20%.  VF tyres will carry 40% more load, at identical pressure, than a standard radial tyre – or will carry the same load at 40% lower pressure.

By lowering the pressure required to carry the weight, a VF tyre footprint is enlarged and therefore increases traction and consequently fuel economy.  It also reduces compaction resulting in better plant growth and higher crop yields.

Over the last few years IF and VF tyres have become much more popular.  Popular rowcrop sizes (such as the VF 380/85R38 BKT Spargo for the JCB 4220 Fastracs) and VF tyres in standard tyre sizes (such as Michelin Axiobib 2’s and Bridgestone VT-Tractor) have made low pressure tyres a more viable option for farmers.  A table of the common IF and VF makes and models are shown below:

How to calculate a tyre’s load rating

What is the load rating of my tyre?

The load index of an agricultural tyre can be found on the side of the tyre and is always mentioned together with the speed index. The load index indicates how much weight the tyre is able to cope with (at the correct tyre pressure). Never exceed the load index mentioned on the tyre! The speed index is a code that expresses the maximum speed one can drive with a tyre. 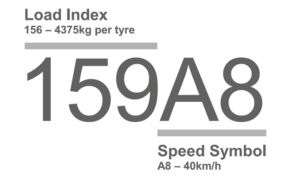 Use the table below to work out the load and speed rating of a tyre.

Load index: This is the maximum load that can be carried at the speed indicated by the speed symbol at nominal pressure.

Speed Symbol: This is the maximum speed at which a tyre can carry a load that matches the load index.

This website uses cookies to improve your experience while you navigate through the website. Out of these cookies, the cookies that are categorized as necessary are stored on your browser as they are essential for the working of basic functionalities of the website. We also use third-party cookies that help us analyze and understand how you use this website. These cookies will be stored in your browser only with your consent. You also have the option to opt-out of these cookies. But opting out of some of these cookies may have an effect on your browsing experience.
Necessary Always Enabled
Necessary cookies are absolutely essential for the website to function properly. This category only includes cookies that ensures basic functionalities and security features of the website. These cookies do not store any personal information.
Non-necessary
Any cookies that may not be particularly necessary for the website to function and is used specifically to collect user personal data via analytics, ads, other embedded contents are termed as non-necessary cookies. It is mandatory to procure user consent prior to running these cookies on your website.
SAVE & ACCEPT